32. The proportion of the population receiving public water supply12 has increased to 82 percent, an 8 percent increase compared to the situation five years ago and reflecting regional trends toward expansion of formal services and regionalization. Table 5 summarizes the evolution of the population connected to public supply. The most significant increases are observed in Kosovo, Moldova, North Macedonia, Croatia, Slovenia, and Serbia, where important investments have been made to connect more of the population to public water supply and to expand networks. Table 6, Figure 14, panels a and b, and Figure 15 showcase the type, size, proportion, and number of service providers in the region. Regional operators in 2018 provide services to 37 percent of the total Danube population, which represents an increase of 4 percent compared to five years ago. This evolution reflects an WSS aggregation trend going on in several countries of the region. Seemingly contradictorily, the number of municipal utilities and their average size has increased compared to five years ago, but in a context of overall population decrease in the region, their market share remains unchanged at 27 percent. As a result, fewer people are relying on self-provision or informal providers (18 percent) compared to five years ago (26 percent), underlining the efforts being made in several countries to connect rural population to regional and municipal utilities, and to a lesser extent to small formal providers ( 2 percent). 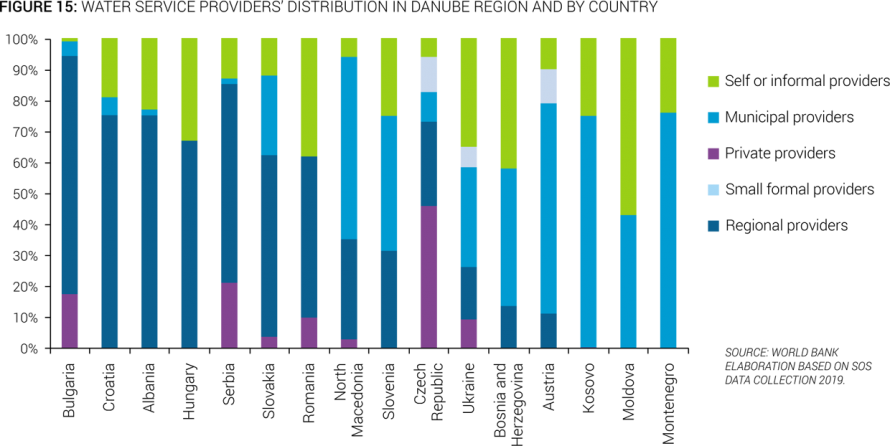 33. Public-private partnership (PPP) contracts are signed and in force for WSS service provision in seven countries with increasing number of customers, and perception toward PPPs for WSS services has improved slightly. Overall, 75 private operators are reported to serve close to 15 million people, thus retaining around 11 percent of the market share. These figures show that, over the past five years, although the number of PPP arrangements has decreased by 8 percent, the total number of PPP customers increased by 6 percent, underlining that private operators tend to expand services to additional customers rapidly, mostly in large and urban areas. In Albania and Moldova, where there are presently no PPP contracts in place, dedicated legal provisions have been made to support PPP introduction, because PPPs are perceived as positive drivers for change and improvement. In Croatia, where there are no PPPs, the law would have to be amended to introduce PPPs, because the current Water Act provides only for a public model of service provision. As reported for Austria, Bulgaria, the Czech Republic and Slovenia,14 PPPs suffer from a negative perception, irrespective of their real efficiency and performance.

34. The overall aggregation index15 of the water sector in the region has slightly decreased from 75 percent to 72 percent over the past five years, telling a nuanced regionalization story in which the number of regional operators has increased but the number of municipal operators has also increased, bringing the overall index down. The aggregation index of water utilities varies widely across the region, with Hungary showing a very concentrated sector with 40 utilities and 3,155 municipalities, and Austria displaying a quite atomized sector with 5,465 utilities and 2,098 municipalities. Montenegro, Albania, Serbia, North Macedonia, and Bosnia and Herzegovina tend to have as many utilities as municipalities (Table 7).

35. In rural areas, water services are normally organized through a nearby utility, community-based organizations (CBOs) or self-provision. In 2015, a large knowledge gap was identified related to the state of rural service provision. To address this, in 2017 the DWP launched a review of rural services in seven16 countries of the Danube region. The study shows that local service provider models continue to play an important role in rural water supply in many countries, especially in Bosnia and Herzegovina, Moldova, Ukraine, and Romania. The reach of larger urban or regional utilities into rural areas has been most successful in Croatia, followed by Kosovo. For Moldova it is estimated that two-thirds of its rural systems are managed by local operators. In Romania, about half of those with piped access from a network are served by regional operating companies, and the other half, either by a municipal enterprise or directly by the local government. In Ukraine, rural service provision is the domain of more than 1,000 small municipal enterprises receiving licenses from regional administrations. Bosnia and Herzegovina’s municipal utilities have not been very effective in reaching rural areas, with an estimated 20 percent access while others are served by an unknown number of local operators and through self-supply (piped). Models include systems operated by a village entity (a subunit of the municipality), community or citizen groups, and local private operators. In Albania, the exact number of local systems is not fully known in some jurisdictions, and these systems, typically operated by former communas or by community groups, are now being transferred to larger municipal utilities. In Kosovo, the inventory of local systems is almost complete, and 15 percent of the rural population is served by systems managed by community groups. Their rehabilitation and integration with the regional water companies is well-advanced, which will result in 70 percent coverage in rural areas and is expected to further increase to 90 percent in the medium term. In Croatia, the reach of public utilities—mostly multimunicipal—in rural areas is the most effective (67 percent), followed by individual piped self-supply (Figure 16 and Table 8).

36. Several countries in the region have considered aggregation to improve efficiency and performance and to extend coverage to rural areas, although with various levels of success and mixed results. After Kosovo’s and Romania’s efforts, Hungary, Croatia, Albania, and Moldova set up WSS reforms targeting the aggregation of municipal utilities in regional companies. In Croatia, after the elections held in 2015, the aggregation process was first delayed and then lost political support following the change of the central government. In the meantime, it has made important strides toward connecting and delivering services to its rural population. In Moldova, since 2009, the process of creating regional WSS companies has remained limited and is currently centered on urban areas, while integration of rural areas has received little attention. As a result, the rural sector is still largely fragmented: there are more than 1,000 locally managed rural water systems. The national strategy had planned to set up three to six regional water utilities to improve service and expand to rural areas. Thus far, with support of several donors, nine regional companies with joint stock company status have been created. In addition, the regionalization path has not been unequivocally successful, since an attempt to merge six service providers into one utility company (Apa Nord) has stalled. In Kosovo, the regionalization process was accompanied by a 10-year, targeted investment program to improve performance and expand services to rural areas supported by a long-term partnership with the Swiss government. Although a proportion of the rural population is still served by local systems, regional water companies (RWCs) are expected to cover 90 percent of the total population by 2020. Based on a national inventory dated 2017, 55 percent of the rural population are already served by RWCs. In Romania, the regionalization has improved service performance, and eased absorption of EU funds. It was also intended to increase rural access to services. However, investments made by regional utilities have focused on improving wastewater services in cities and towns that are denser (and commercially more viable because poorer rural populations have more affordability constrains). This cherry picking has resulted in local governments’ hesitation to join regional entities. Instead, they have chosen their own local service provider, so that around half of the rural households served by piped networks receive services from local operators. Nevertheless, recent data (ANRSC 2016) show that rural piped access has increased to 40 percent, indicating that both regional operating companies and local operators have contributed to this improvement (see Box 2). However, only one-third of rural communes benefited from access to investment and professionalized services from regional operating companies in 2017.

37. To achieve the goal of universal access to safe services under the SDGs, most countries will need a portfolio approach that adopts different service delivery models for reaching different rural population groups. It is recommended that countries analyze their service provision structure to determine the service delivery models that can most effectively achieve universal access. The enabling policies, legislative framework, and financing measures need to recognize this. When sectors have well-capacitated urban and regional utilities, well-established regionalization reforms, and strong incentives for rural service provision, hybrid approaches may not be necessary or desirable, such as in Kosovo and Croatia. However, reform support programs can help utilities cope quickly with expanded service obligations, as in Albania. Highly decentralized countries, such as Moldova and Ukraine, may naturally opt for a hybrid approach of combining regional and urban utilities and the local operator model. Regionalization in this context requires strong incentives for collaboration among local governments. Self-supply models are suitable for remote and dispersed settlements and have relevance for virtually all countries. For countries with declining rural populations and limited fiscal space to invest, supported self-supply will remain extremely relevant. Low-density rural areas may also require local operator models (Ukraine, Moldova).