A. Availability and Quality

10. Availability of renewable water resources within the Danube Basin has remained stable for the past five years with no country considered water scarce. The Danube River Basin continues to be relatively rich in water resources, but this richness is not evenly spread, and there are significant differences among different parts of the basin (Figure 2). The Czech Republic and Kosovo are the only countries in the region that can be qualified as water stressed countries, with a yearly renewable water resources per capita below the threshold of 1,700 cubic meters (Falkenmark, Lundqvist, and Widstrand 1989). Differences in the data reported between 2008 and 2012 and to 2014 may be a result of less water consumption due to declining populations (more available water per capita), yearly changes due to increased or decreased precipitation, or better water data availability.

11. Since 2009, the surface water bodies in the Danube region reaching good ecological11 or potential good status and good chemical status have increased by 3 percent and 25 percent, respectively (Figure 3, panels a and b, and Figure 4, panels a and b). This improvement in ecological status, a key element of the EU Water Framework Directive (WFD), could be attributed to the implementation of actions stemming from the 2009 Danube River Basin Management Plan (RBMP), in which the basin experienced improvements in terms of pollution reduction or improved hydromorphology. At the same time, more data and information have been gathered on the quality of rivers, transitional waters, and coastal waters, thus closing knowledge gaps. This has resulted in the reduction of the share of water bodies displaying “no data” from 25 percent in 2012 to 9.4 percent in 2015. The information on chemical status is based on the analysis of priority substances in water and does not include data on mercury in biota (except in the Czech Republic). This parameter is a decisive element in evaluating the chemical status of surface water bodies, and not including it may lead to biased reporting.

12. The significant water management issues identified for the Danube River Basin continue to include organic matter excess and high levels of nutrients, particularly affecting groundwater bodies of basinwide importance. Nitrogen and phosphorus from untreated and inadequately treated wastewater; agricultural and industrial activities; humanmade chemicals; metals; oil and its compounds; organic micropollutants; pesticides; medications from wastewater, industry, and urban stormwater run-off; and combined sewer overflows—including from agriculture— remain major risks (ICPDR 2015). Many countries are struggling with the compliance with EU directives, especially with the Urban Waste Water Treatment Directive (UWWTD); hence, progress in the reduction of nutrients entering water bodies is slow. UWWTD agglomerations are responsible for only a part of total nutrients entering water bodies. Point sources and urban run-off account for 26 percent and 51 percent of total nitrogen and phosphorus emitted into the Danube River Basin, respectively (World Bank 2018b). Diffuse pollution represents the most important pollution pressure in the Danube River Basin, and its better management represents an important area for improving the ecological status of river basins.

13. For most countries in the region, groundwater remains the major source for drinking water production, with some country-level changes regarding the proportion between groundwater and surface water use compared to 2015. For example, in the Czech Republic and Serbia groundwater use for drinking water production has decreased, while Ukraine and Bulgaria present an opposite trend (Figure 5). In Serbia, this evolution may result from the decrease in existing wells capacities and from low maintenance of existing source fields. Moreover, new water intakes and associated facilities are mainly built using surface water. In Bulgaria, the opposite trend has been observed. Urban areas, which benefited from large amounts of asset investments, are mainly supplied by surface water. On the contrary, rural areas are supplied with groundwater and have suffered from underinvestment, resulting in increasing water losses, which induces a higher consumption of groundwater. 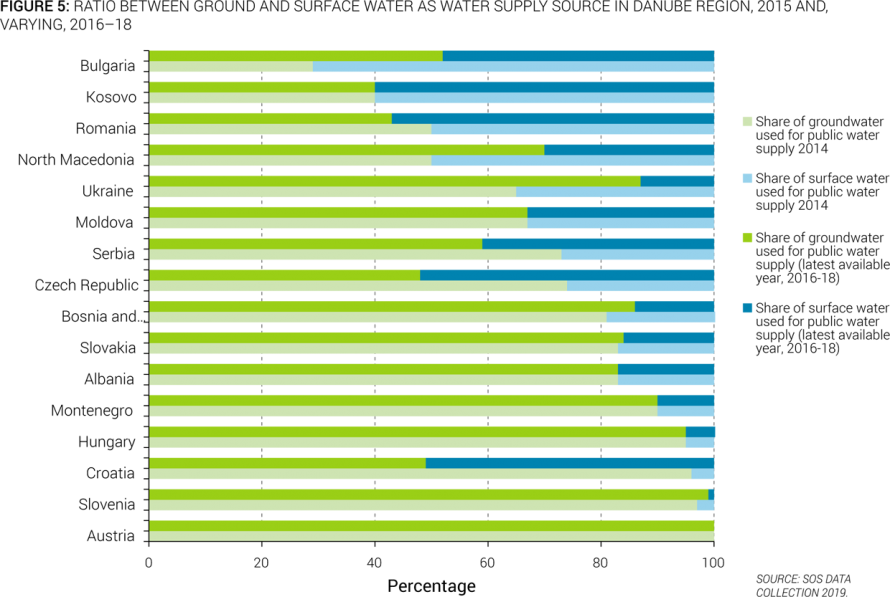